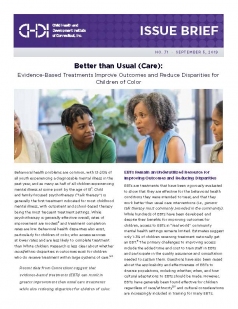 Search the Connecticut Evidence-Based Practices Directory.  This directory lists providers trained in some of the evidence-based practices that are available in Connecticut for children and families with behavioral needs. 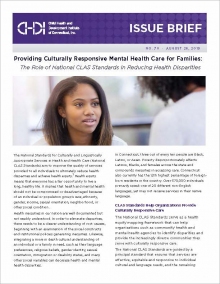 Behavioral health problems are common, with 13-20% of all youth experiencing a diagnosable mental illness in the past year, and as many as half of all children experiencing mental illness at some point by the age of 181. Child and family-focused psychotherapy (“talk therapy”) is generally the first treatment indicated for most childhood mental illness, with outpatient and school-based therapy being the most frequent treatment settings. While psychotherapy is generally effective overall, rates of improvement are modest2 and treatment completion rates are low. Behavioral health disparities also exist, particularly for children of color, who access services at lower rates and are less likely to complete treatment than White children. Research is less clear about whether racial/ethnic disparities in outcomes exist for children who do receive treatment within large systems of care.3, 4

Recent data from Connecticut suggest that evidence-based treatments (EBTs) can result in greater improvement than usual care treatments while also reducing disparities for children of color.

EBTs are treatments that have been rigorously evaluated to show that they are effective for the behavioral health conditions they were intended to treat, and that they work better than usual care interventions (i.e., generic talk therapy most commonly provided in the community). While hundreds of EBTs have been developed and despite their benefits for improving outcomes for children, access to EBTs in “real world” community mental health settings remains limited. Estimates suggest only 1-3% of children receiving treatment nationally get an EBT.5 The primary challenges to improving access include the added time and cost to train staff in EBTs and participate in the quality assurance and consultation needed to sustain them. Questions have also been raised about the applicability and effectiveness of EBTs to diverse populations, including whether, when, and how cultural adaptations to EBTs should be made. However, EBTs have generally been found effective for children regardless of race/ethnicity2,3 and cultural considerations are increasingly included in training for EBTs.

Connecticut is a Leader in Improving Access to EBTs

Connecticut, led by the Department of Children and Families (DCF) and the Court Support Services Division of the Judicial Branch, has been a national leader in improving access to EBTs for children with behavioral health conditions over the past 15+ years. DCF has partnered with CHDI to support dissemination of several EBTs in outpatient behavioral health clinics and schools as a key component of improving access to high-quality children’s behavioral health services statewide. Since 2007, more than 1,500 clinicians have been trained and more than 14,000 children have received one of these EBTs. Trauma-Focused Cognitive Behavioral Therapy (TF-CBT) and Modular Approach to Therapy for Children with Anxiety, Depression, Trauma, or Conduct Problems (MATCH-ADTC) are two of several models being widely implemented in Connecticut’s outpatient clinics. Recent data indicate approximately one third of children receiving outpatient treatment received a specific EBT, while another third received cognitive behavioral therapy (CBT), a more general EBT.

CHDI analyzed administrative data from 46,729 children (mostly between 3 and 17 years old) who received treatment at 25 DCF-contracted outpatient children’s behavioral health clinics in Connecticut between 2013 and 2017 to examine the use of EBTs and their effects on child outcomes. Outcomes were measured using the Ohio Scales problem severity scale, which is a general measure of children’s behavioral and emotional health that is reported separately by caregiver and clinician. Clinicians also reported the type of EBT or other treatment(s) provided to each child. Results from this preliminary analysis show that the use of EBTs resulted in improved outcomes and reduced or eliminated disparities in outcomes compared to usual care (see Figure 1). 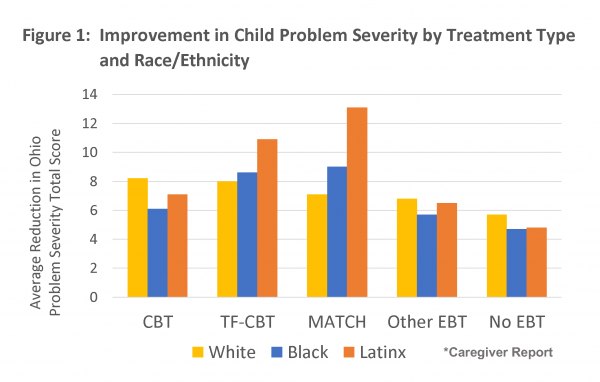 Children who did not receive an EBT (e.g. received usual care) showed the lowest rates of improvement and greatest disparities:

EBT use was high, and children receiving an EBT showed greater improvement with fewer racial/ethnic disparities:

Next Steps Toward Equitable and Effective Children’s Behavioral Health Services

In summary, these results suggest a complex picture of outpatient children’s behavioral health treatment outcomes in Connecticut. Children showed overall improvement at rates consistent with the limited national research on community-based behavioral health. On the other hand, approximately half of all children do not show meaningful improvement, also consistent with national research, and outcomes are also worse for children of color. While rates of EBT use in Connecticut are much higher than national estimates, too many children still do not receive an EBT.

More children are receiving EBTs in Connecticut each year, and Connecticut is one of the first states where EBTs have been effectively scaled up statewide while demonstrating better outcomes than usual care. Data show that the increasing availability of EBTs is both improving outcomes for all children and appears to reduce or eliminate disparities in outcomes for Black and Latinx children. This indicates that continuing to expand access to EBTs is a promising strategy for improving outcomes and closing the gap in disparities.

The following recommendations are made: